Star Valley Wyoming is approximately 14 miles wide and 50 miles long, located in the mountains on the western edge of Wyoming, adjacent to Idaho. The valley is blessed both with incredible scenery and great people. 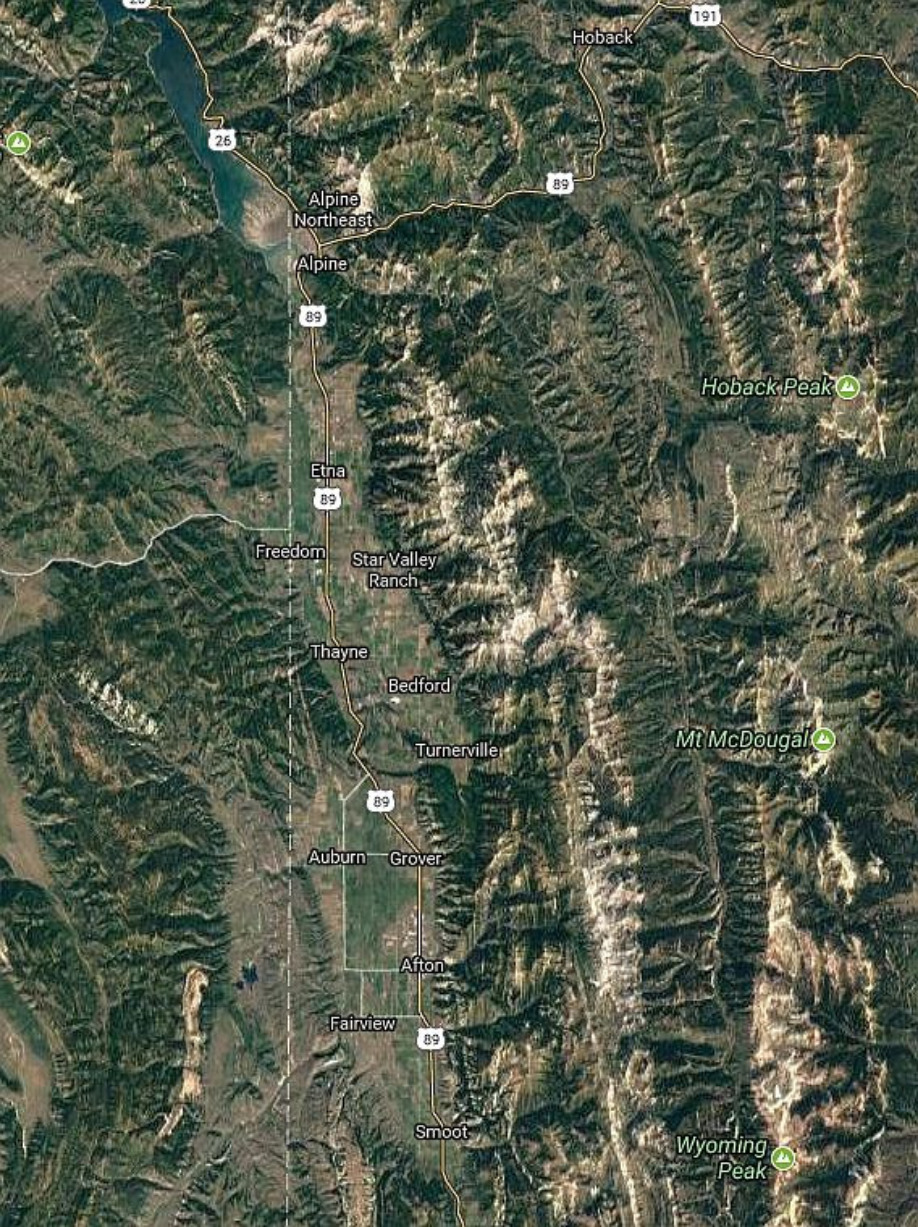 Star Valley is surrounded by the Bridger Teton, Caribou, and Targhee National Forests. Altitudes range from 5,600 feet to 7,000 feet with the mountains rearing to over 10,000 feet. Three major Wyoming rivers - the Salt River, the Greys River and the Snake River - meet at Alpine Junction to form the Palisades Reservoir, which, along with many streams and small mountain lakes, provides ample fishing for cutthroat trout, German browns, brookies, rainbows and mackinaw. The reservoir also provides boating, water skiing and jet skiing, while the Snake River has white water rafting and kayaking.

Big game in Star Valley include moose, elk, mule deer, bear, and mountain lions. Geese, duck, sandhill Cranes, trumpeter swans, osprey, and grouse also enjoy the valley. Alpine is home to the Elk Feed Ground where an average of 800-900 elk winter, and are fed by the Wyoming Game and Fish Department.

Settlement
Star Valley Wyoming was settled in the late 1870's by hearty Mormon pioneers, and was proclaimed the "Star of All Valleys" for its natural beauty. With star-studded night skies where the Northern Lights can occasionally be seen, Star Valley gloriously lives up to its name.

Star Valley was inhabited mainly by Shoshone Indians in the summer and fall months until the early 1800's. The natives were drawn to the valley for its abundant game and the pure salt deposits found near the present town of Auburn. No doubt they enjoyed the scenery as well.

White explorers are known to have traveled through the area as early as 1812, seeking new routes to the West coast. Canadian and American trappers followed, frequenting the area through the 1840's. The 1850's and 1860's saw many emigrants passing through the upper Star Valley area via the Lander Trail. White settlement of the area didn't begin in earnest, though, until the late 1870's when Church of Jesus Christ of Latter-Day Saints apostles Moses Thatcher and Brigham Young, Jr. chose the valley for colonization.

The pioneers first enjoyed some mild winters but were then caught off guard by some incredibly harsh winters during which large numbers of livestock were lost and the settlers suffered many hardships. Accounts of their lives dealing with snow 8 feet deep on the valley floor demonstrate the courage and tenacity of these early settlers whose descendants still inhabit the valley today.

The industrious people who settled here began work early on to provide needed services in the area. By 1907 electrical power was available to residents of Afton. However, residents outside the town limits waited another 30 years for power. Lower Valley Power and Light began organizing in 1936 as a cooperative, and by late-1938 was supplying electricity to co-op members both in town and in rural areas. Today it operates as Lower Valley Energy, serving all of Star Valley and Jackson Hole, as well as Idaho communities in Swan Valley and the Greys Lake area.

Continued Infrastructure and Business Development
Star Valley's first newspaper, The Pioneer, was established in 1902. Before long, the name was changed to The Star Valley Independent and today The Independent is still publishing local news on a weekly basis. SilverStar Telephone began providing local phone service in 1949. Over the years, with many technological advances and the addition of internet service in 1995, the name has changed to SilverStar Communications. Fiber-level internet speeds are now available through much of Star Valley.

The first hospital in the valley was built in Afton and was completed in 1943. By 1973, it was apparent that a new and improved facility was needed and 6 years later the new 15-bed hospital was built. Through the next twenty years, services were increased to include a clinic in Alpine and a 24-bed nursing home in Afton. Star Valley Medical Center continues to add services, physicians, and specialists, and finished construction of a new facility in 2002 and an "instacare" clinic in 2017.

Through the early part of the twentieth century, several creameries sprang up throughout the valley and agriculture was the focus of the local economy. Herds of dairy cows flourished in the area to supply the creameries, which, along with its setting in the mountains, eventually earned the valley the nickname "Little Switzerland." Irrigation ditches and canals were dug throughout the area, providing needed water to the growing number of farms.

The many smaller creameries came and went, some bought out by larger companies, consolidated, then eventually sold back to locals. Though coming close to closing its doors in 1993, the Star Valley Cheese Factory in Thayne, is the only one that succeeded in making it to the twenty-first century.

Education has always been an important part of the development of Star Valley. Schools were established almost immediately upon settlement. Though in the beginning, classrooms were located in church branches or private homes, it wasn't long before real school houses were built. In the early days, students sometimes spent a week, not just a day, in the school house because the fierce winter weather prevented their safe departure. And, too, there were times they stayed put because of occasional Indian scares which were usually unfounded as the natives were simply passing through on hunting trips.

Now Star Valley schools are top-notch in the state and have produced many high achievers. The High School has outstanding sports programs, evidenced in the valley's own Olympic Gold Medalist in Greco-Roman wrestling, Rulon Gardner. Many more former students from the valley have been recognized for their accomplishments, achieving success in part because of the training they've received while in the Star Valley school system.

“The Star of All Valleys”
Over the years, as people have discovered the area, the economy has taken a shift from predominantly agriculture-based endeavors to tourism and to businesses and services that have developed to serve the increasing population. Though not as well known as Jackson Hole and the National Parks up the road, Star Valley has become a destination for outdoor enthusiasts who can enjoy a variety of pastimes through the changing seasons, from fishing and camping to snowmobiling and cutter races.

In 1995 the Internet came to Star Valley and "Star Valley Wyoming Online", StarValleyWY.com, was established to present our valley to the world and since that time the valley has become the fastest growing area in Wyoming. We strive to keep this site updated and relevant. Any suggestions, via our Contact Us form, would be appreciated.

Star Valley can be proud of its rich heritage. Its people can also be proud of their efforts to make Star Valley a great place to live, now and for the future.

To learn more about Star Valley's History, and to find historical information, please go to the Star Valley Historical Society's web site by clicking this link.